We decided to play hookie this winter.  We skipped the rain, sleet and snow and seemingly endless grey winter skies by thru hiking the Florida National Scenic Trail.  1103 miles from start to finish. 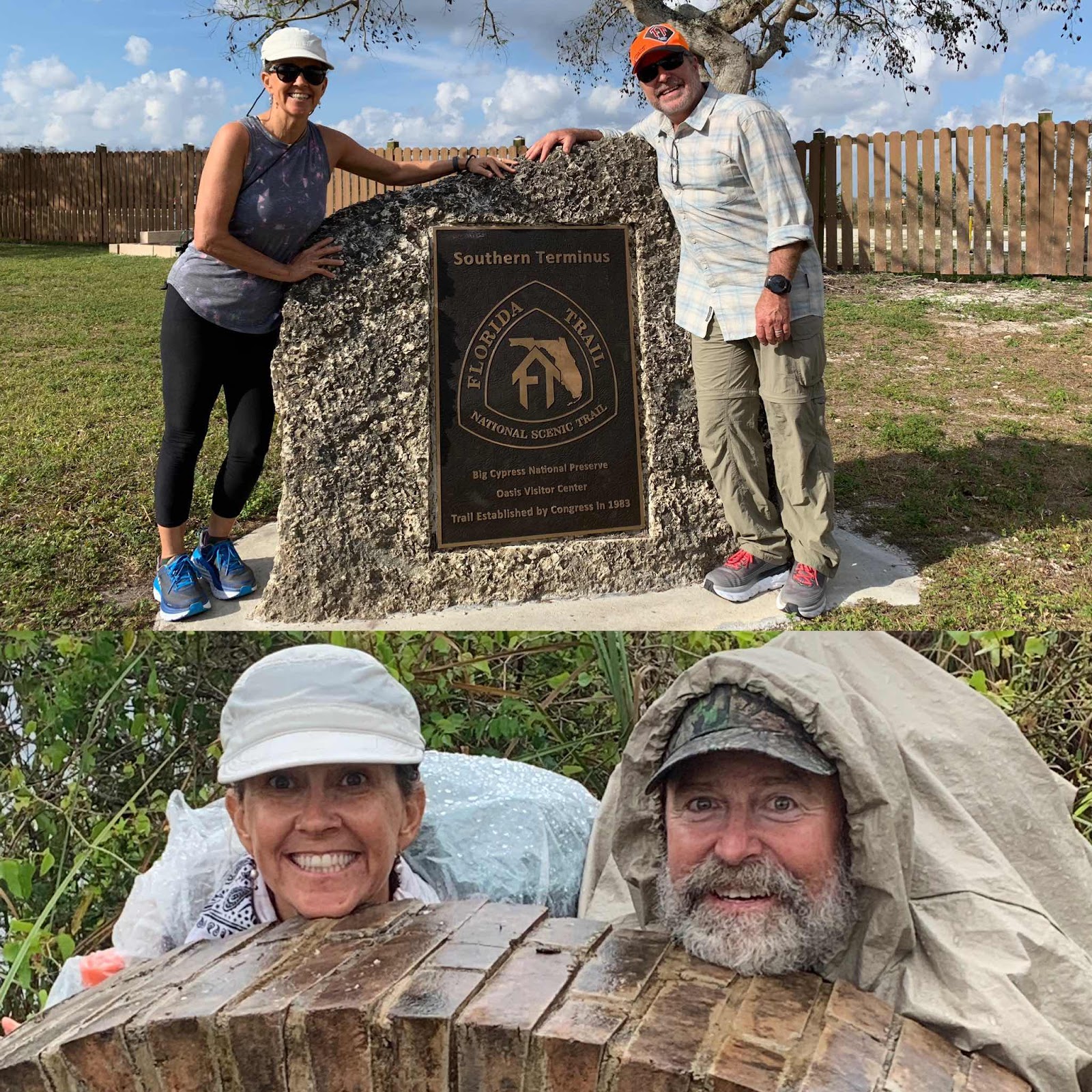 We started under sunny skies at the Oasis Visitor Center in Big Cypress National Preserve near Miami and ended in rain at Fort Pickens near Pensacola. Physically,  Mark grew a beard and lost a few pounds and I pretty much stayed the same.  We changed a bit in other ways though.  We have a bit more grit and  learned that being treated like an unseen homeless person is a bit demoralizing.  We also found Florida to be a lot more that alligators and beaches.  You can read all about our hike at our hiking blog: http://happiesthiking.bligspot.com
Or check out our Florida Trail slideshows on our YouTube channel under TjandMark! 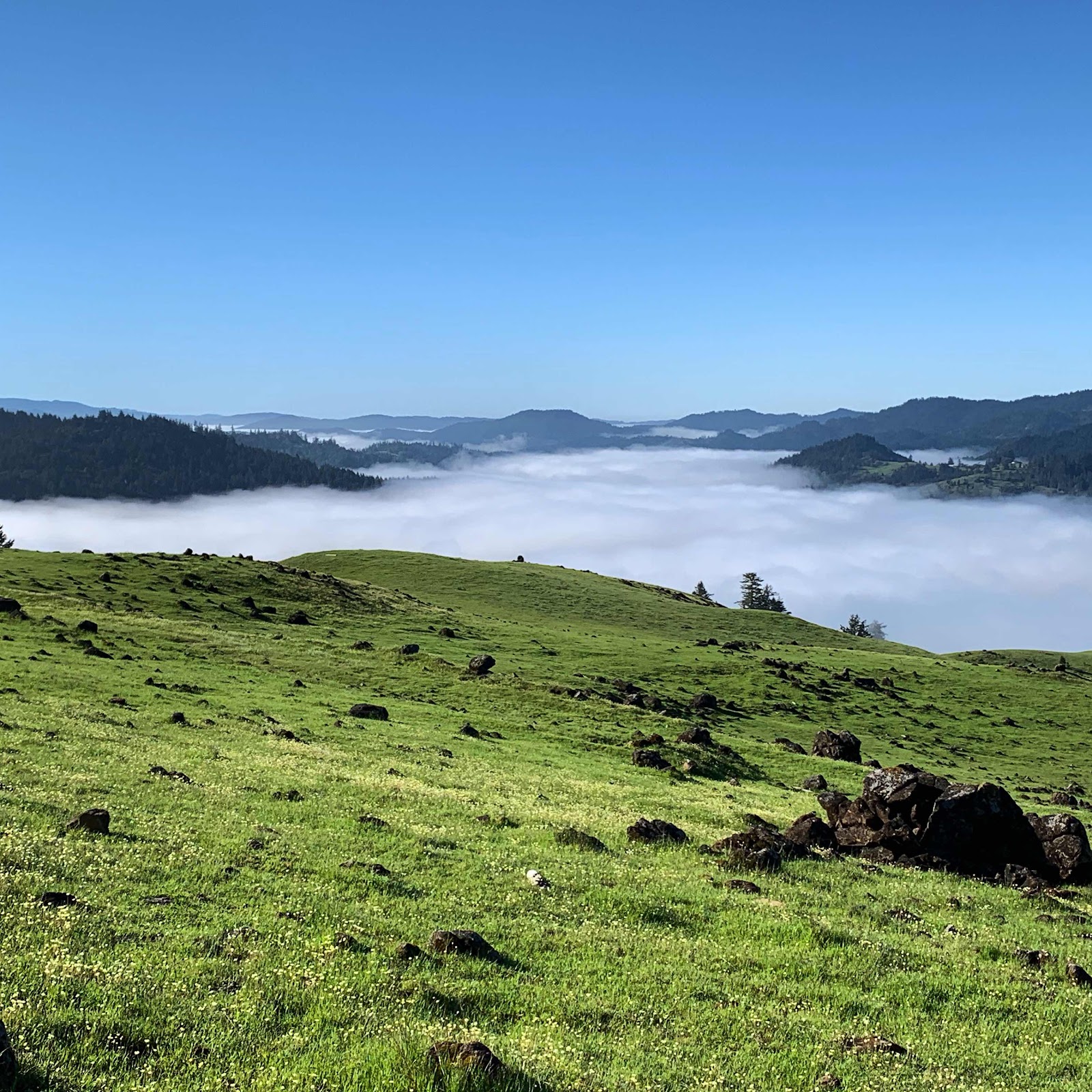 Of course it’s great to be home.  The ranch is pretty wonderful all year, but in the spring it is sensational.   The wild flowers are blooming, the grass is green and the skies sunny.  Bird song fills the air and the wild turkey struts by gobbling.   Our domesticated animals overwintered well too with our sons’ care and luckily they still seem to know us.  The animals, not our sons! 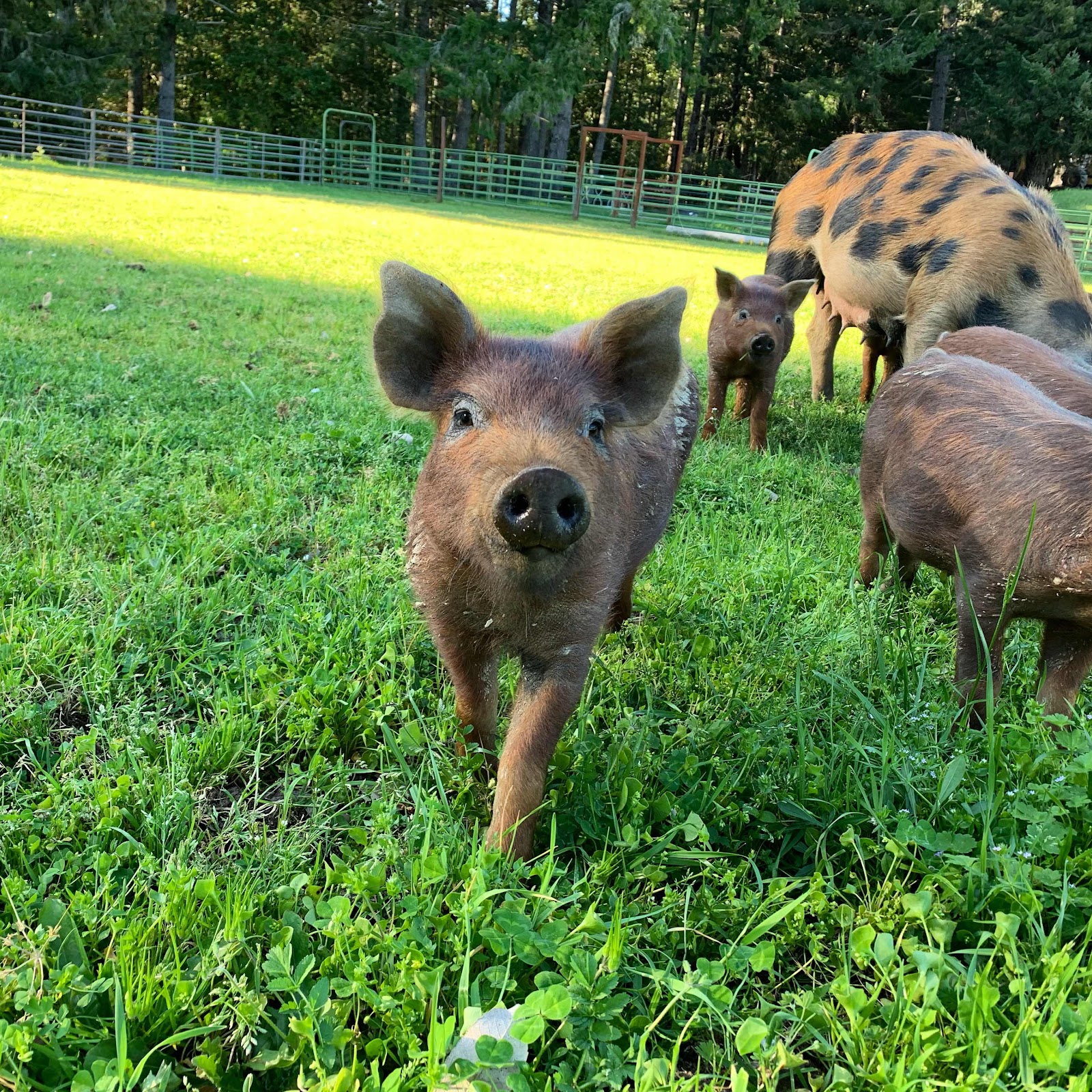 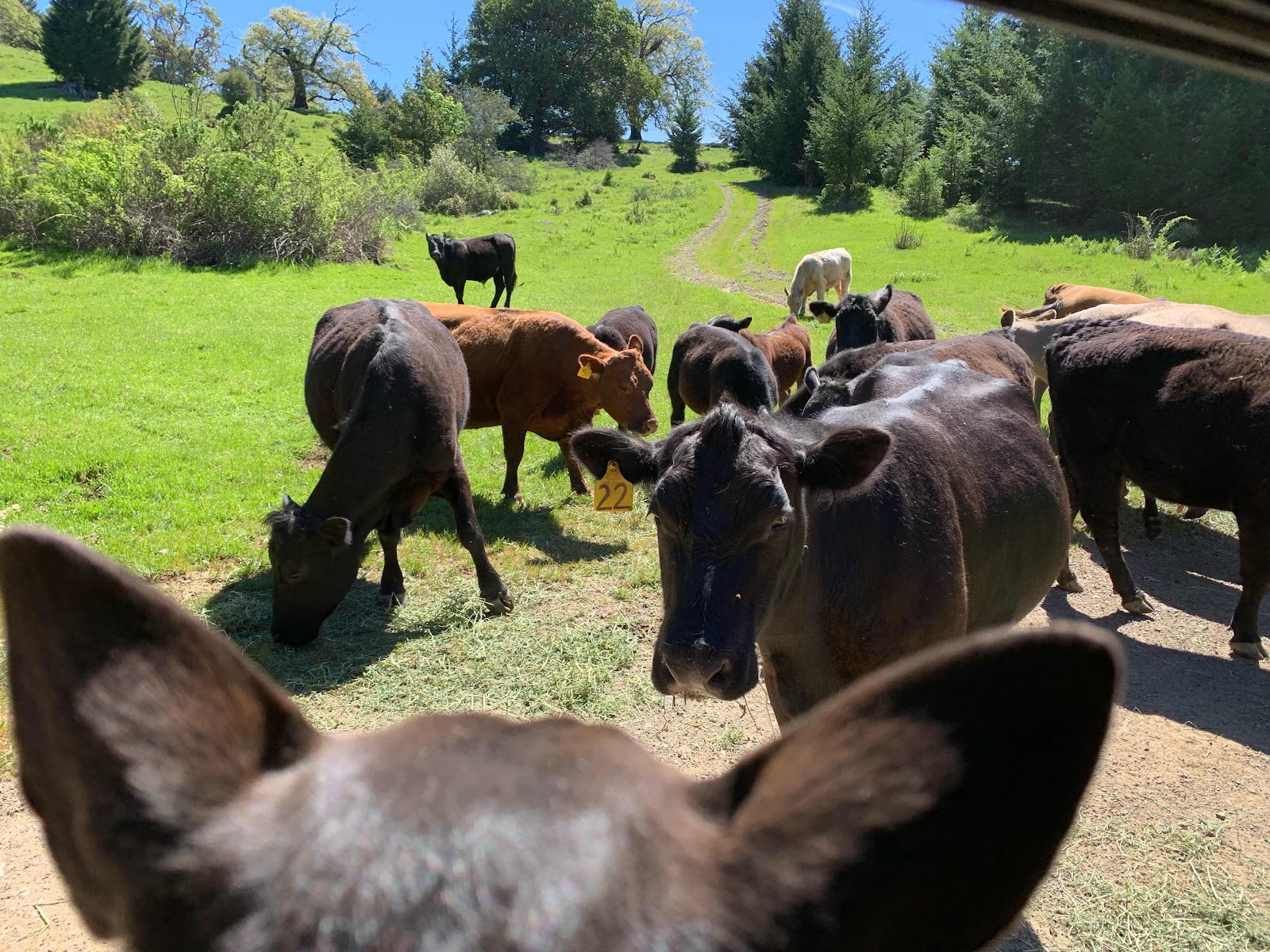 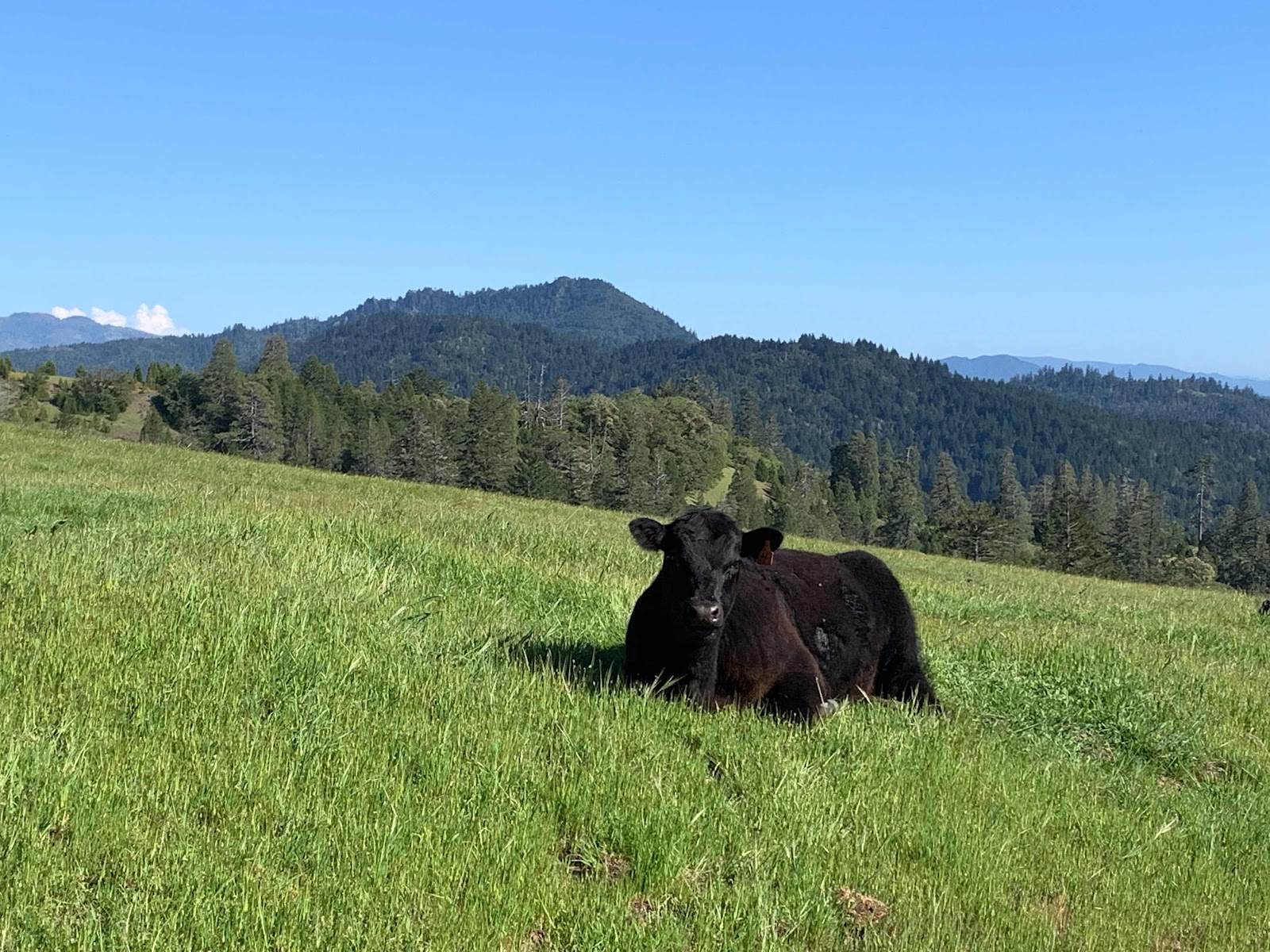 A calf resting in the sun.

We are still offering healthy and humanely raised beef and pork and taking orders for summer harvest.  We also have packaged meat available and you can catch us at a local farmers market or contact us for home delivery.
As they say in Florida,  “Have a bless Ed  day and be safe out there”.
at 4:45 PM 1 comment:

Email ThisBlogThis!Share to TwitterShare to FacebookShare to Pinterest
Labels: cattle, swine, this and that

Who is Your Neighbor?

Living on an isolated ranch, off the grid, at the end of a long dirt road, we don't have a lot of  'neighbors' that pass by our door.  We do have a lot of critters that come by though.  Here's a few: 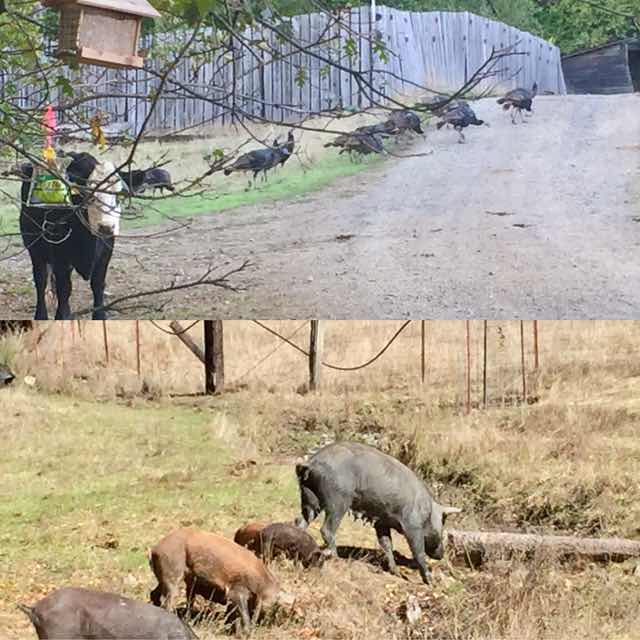 We also have a loving Salmon Creek Community that we are grateful to be a part of.  Recently, our  little school had a Halloween fund raiser and we helped at the door a bit and had a fun time dancing under the stars with a diverse group of folks.  We were, of course,  the ones dressed as 'Jolly Ranchers'! 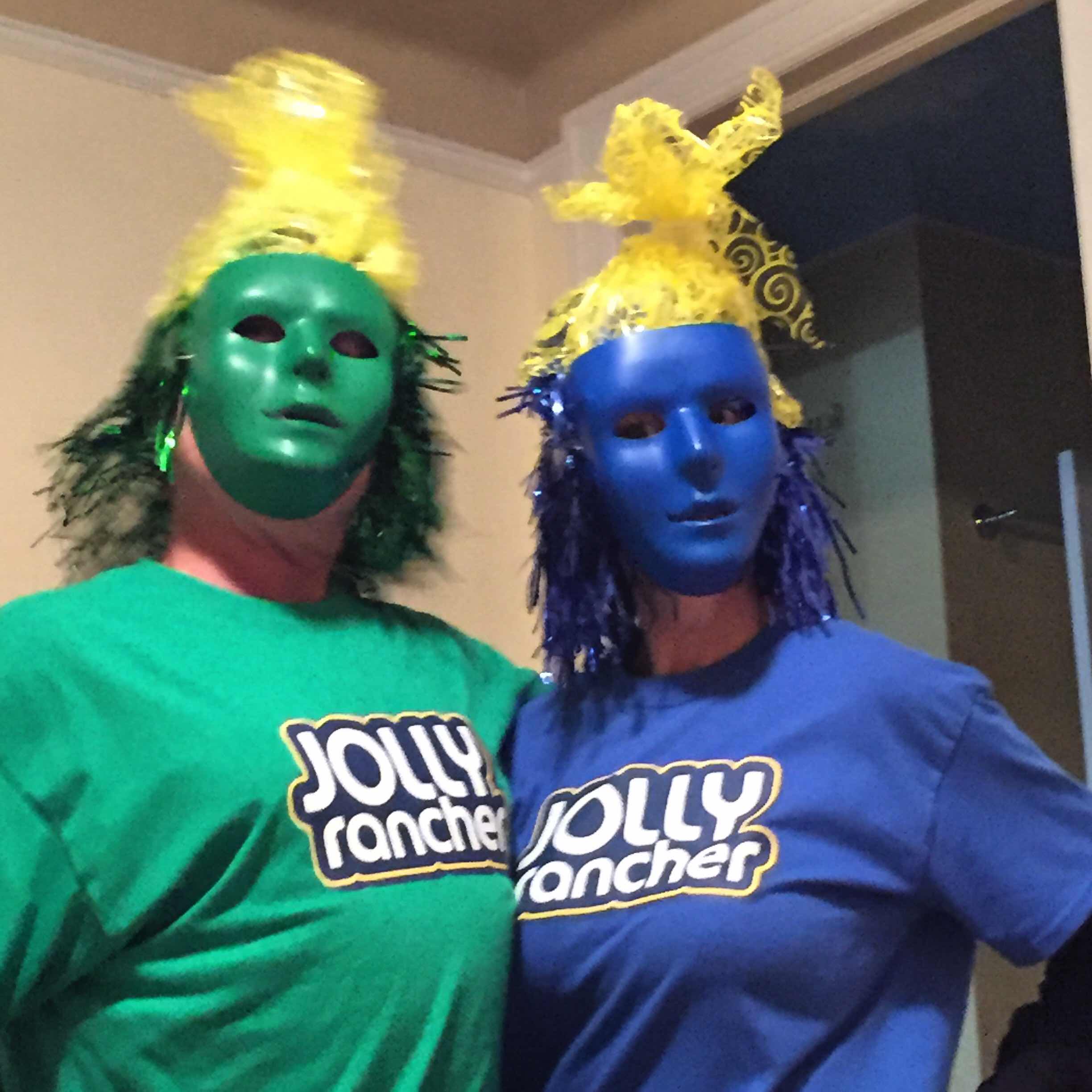 We also belong and care deeply about our fellow Humboldt county residents and  our fellow Americans who share the same constitution and tract of land that we call these United States.  Is there any end to who is our 'neighbor' as we even call nearby planets, neighboring planets? 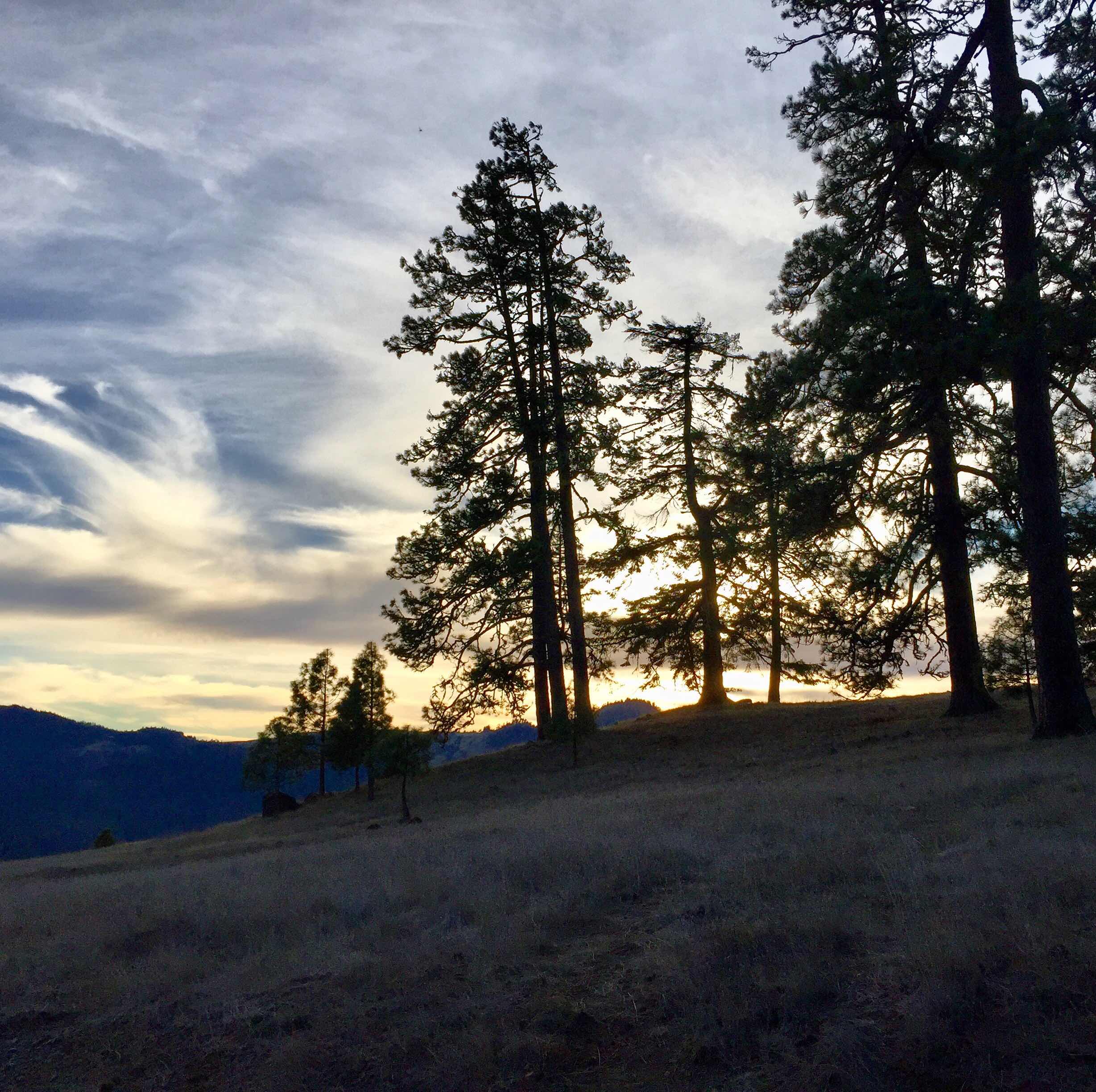 In the Bible a lawyer is questioning Jesus on how to get to heaven.  Jesus replies, ' to love God and to love your neighbor.''   Jesus then goes on to tell one of our favorite parables. It is about a traveler who is robbed, stripped of clothing, beaten and left beside the road.  First to walk by this poor man is a priest and he crosses over to the other side of the road.  Next to pass is a Levite  and he also goes by without helping.  But a Samaritan, as he traveled, came by and helped him.  Jesus then asks, "Which of these three do you think was a neighbor to the man who fell into trouble?" 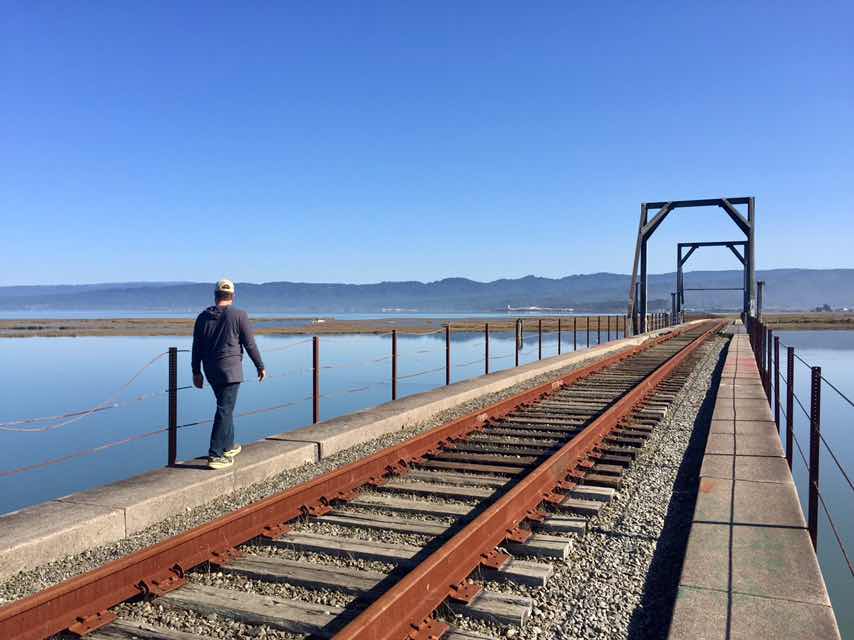 Today, we were in nearby Eureka and we wandered around the city a bit.  We scared a homeless man who had made his home under an old railway bridge, he settled down when he realized we weren’t going to hurt him  and we chatted a while.  He seemed sweet, but off a bit.  Many more homeless walked past us on our meanderings, some said hi, others averted their gaze.  We later stopped for a bite to eat and sat outside in the sun enjoying our lunch.  A poor beggar came by and tried talking to us, but he made absolutely no sense.  His clothes hung from his skinny frame and his eyes were a bit sunk into his skull.  I was a bit taken aback and said nothing.  It was awkward.  His fingers reached so ever slightly toward my food as he mumbled something about a check.  I wish I'd been a better neighbor to him and given him a bite to eat.  Instead I just sat there as  mute and still as these birds. 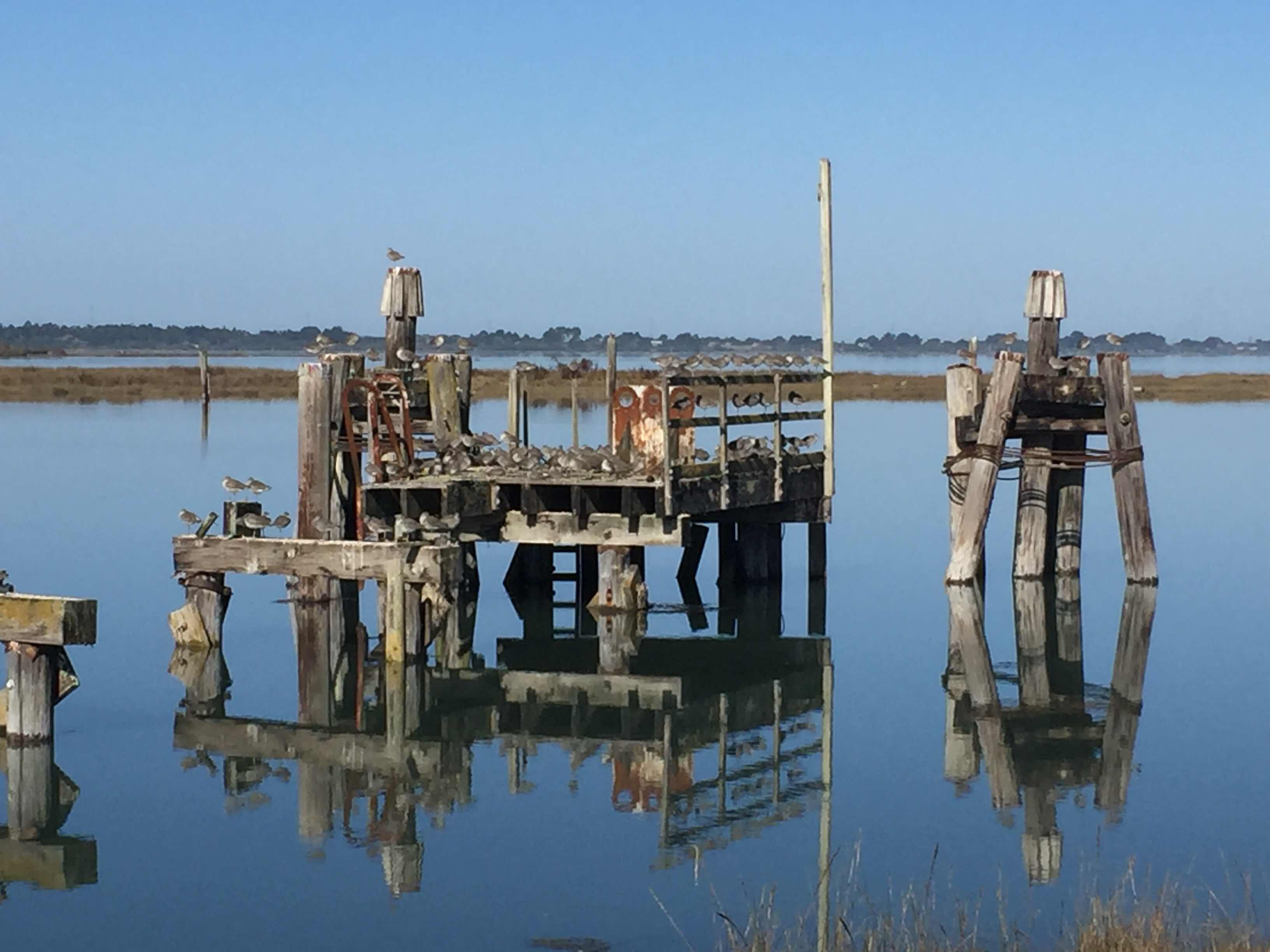 Tonight,  I think about who is my neighbor.  (Besides the cattle, and hogs and wild turkeys.)

What do you think about neighbors?

Email ThisBlogThis!Share to TwitterShare to FacebookShare to Pinterest
Labels: ponderings

Summer.  Where did it go?  When you are a kid the days stretch out like an endless white sand beach.  On the ranch the days go by in what seems like a blink of an eye.  We are busy, busy, busy.
We’ve gathered cattle, sold cattle, butchered cattle, sold meat,  cut firewood, cut timber, hoed weeds, fed hogs, horses and chickens and our bulls, entertained family and friends, swam in the falls countless times and snuck away once to backpack for a few days and had another overnight camping adventure with all five of our wonderful grandsons. Plus, let us not forget, never can we forget, the never ending list of things that break that have to get fixed. This list doesn’t  even take into account  Mark’s side business.
The buckeyes are the herald of the changing of seasons; first to leaf in spring and first to lose in fall.  They are almost barren.   The wet season is coming and with it time  will slow down.  We will slow down.
I think I will peruse my summer snapshots and post a few to help us remember the golden days of summer. 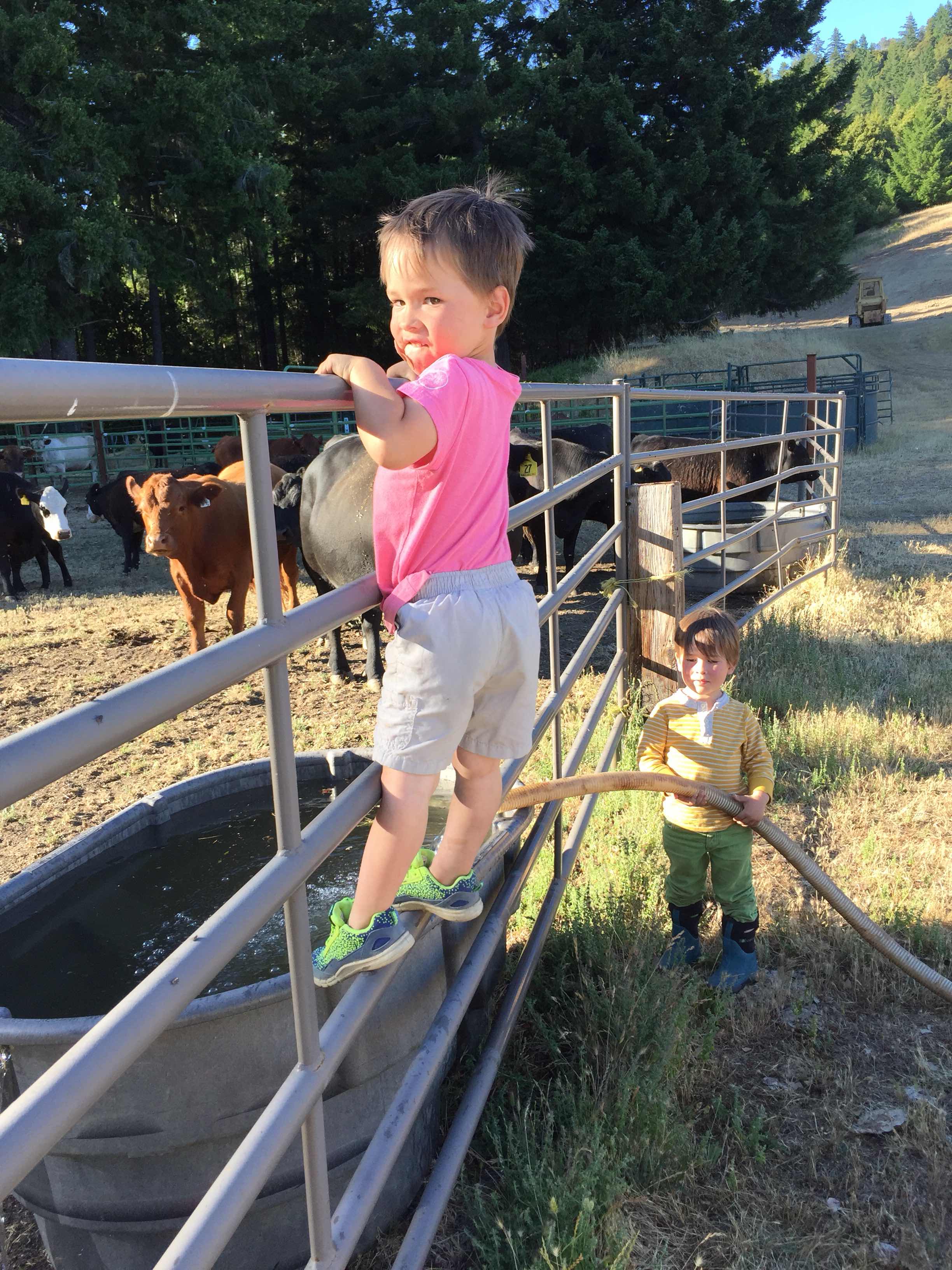 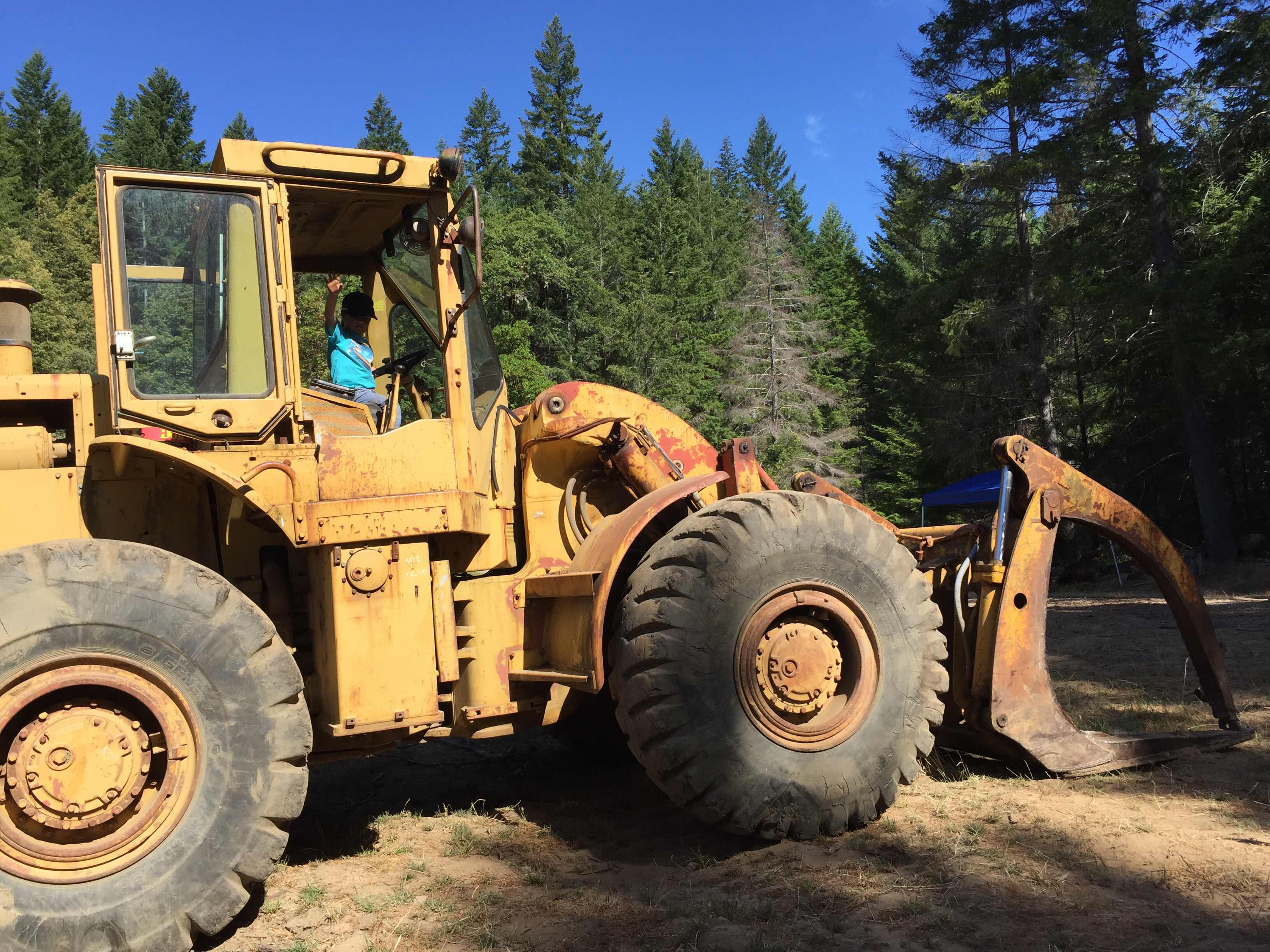 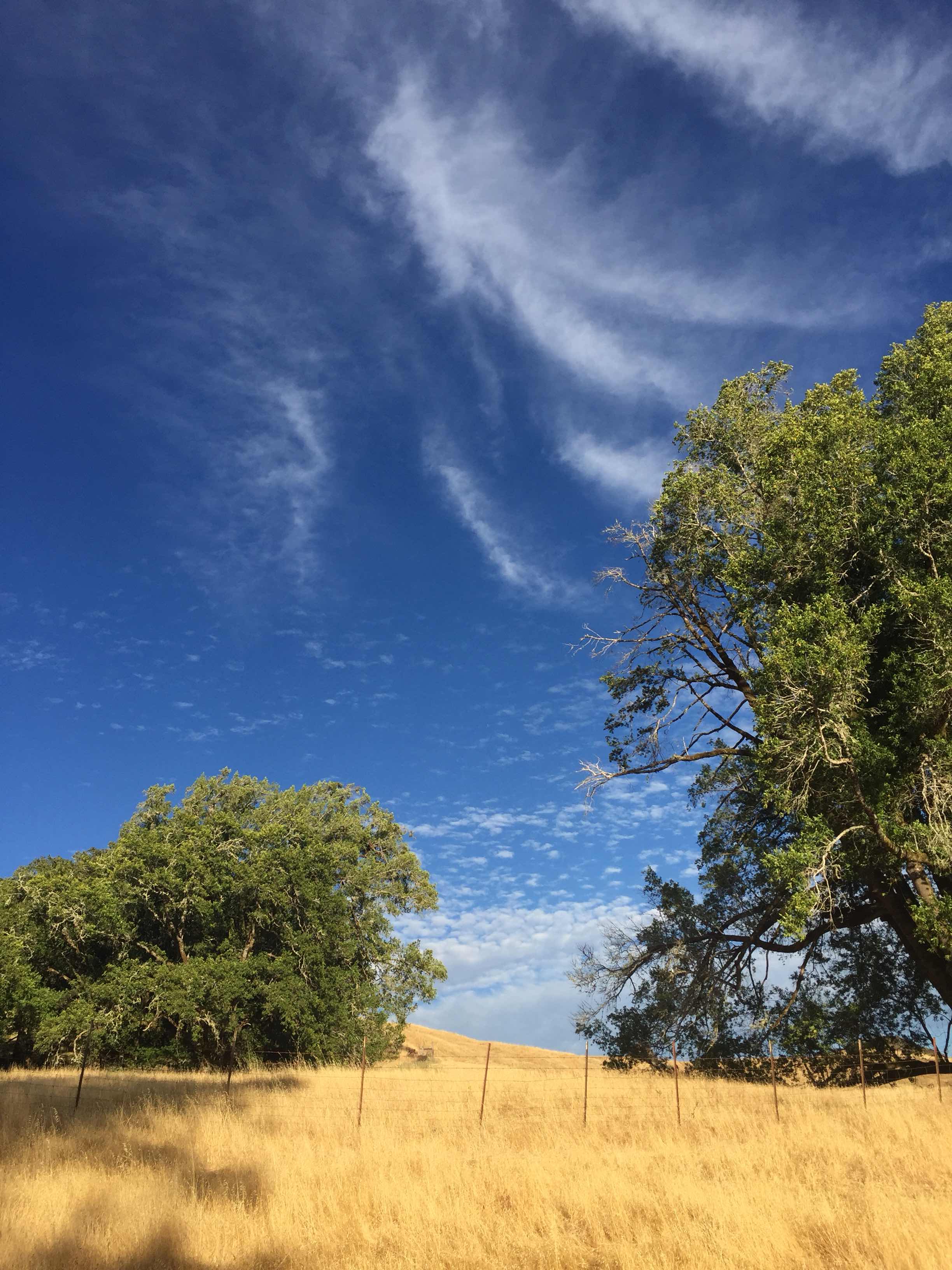 Summer Skies ( we only had a handful of smokey days even though it seems like the west is all on fire!) 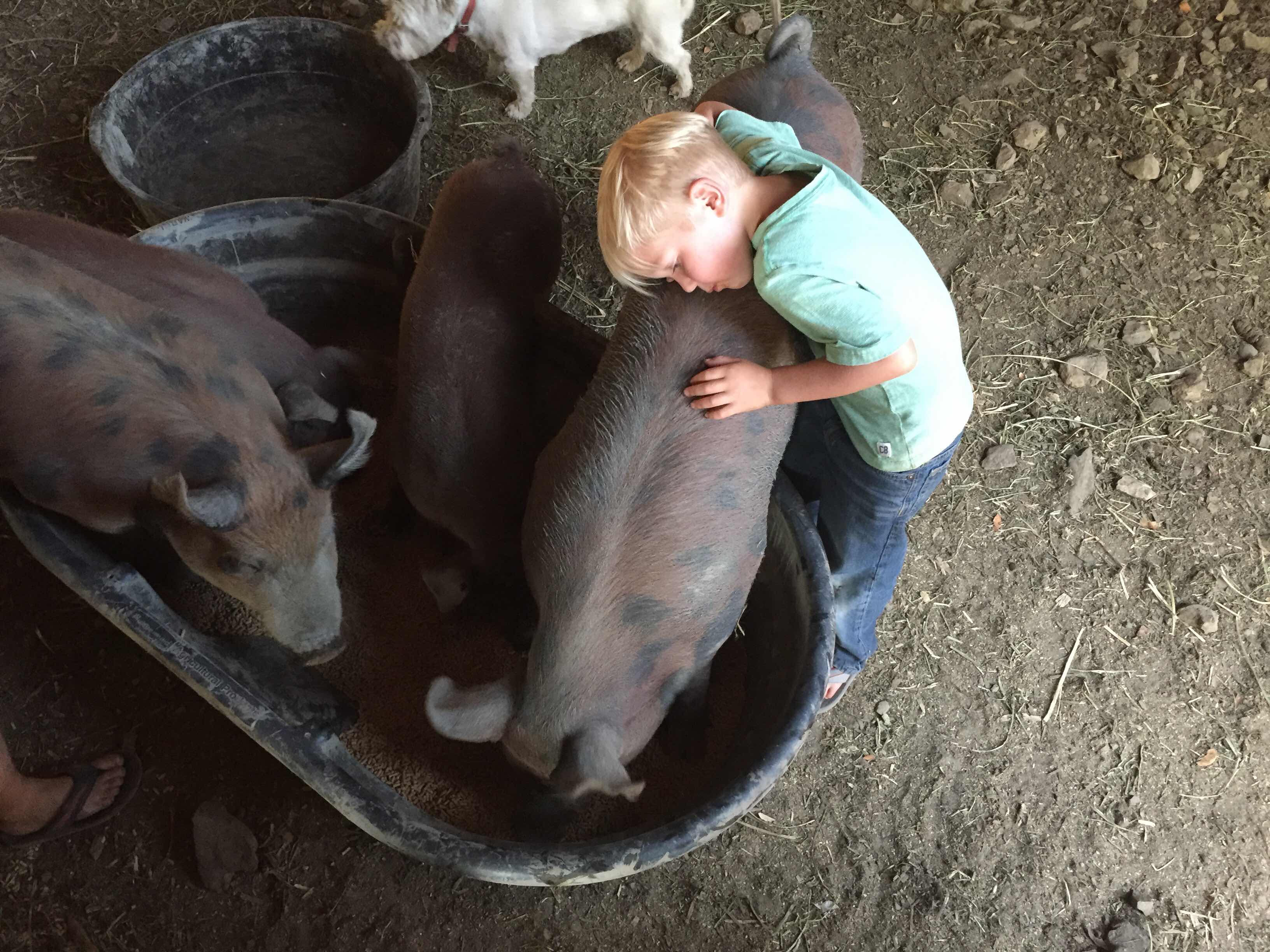 Feeding and hugging on hogs 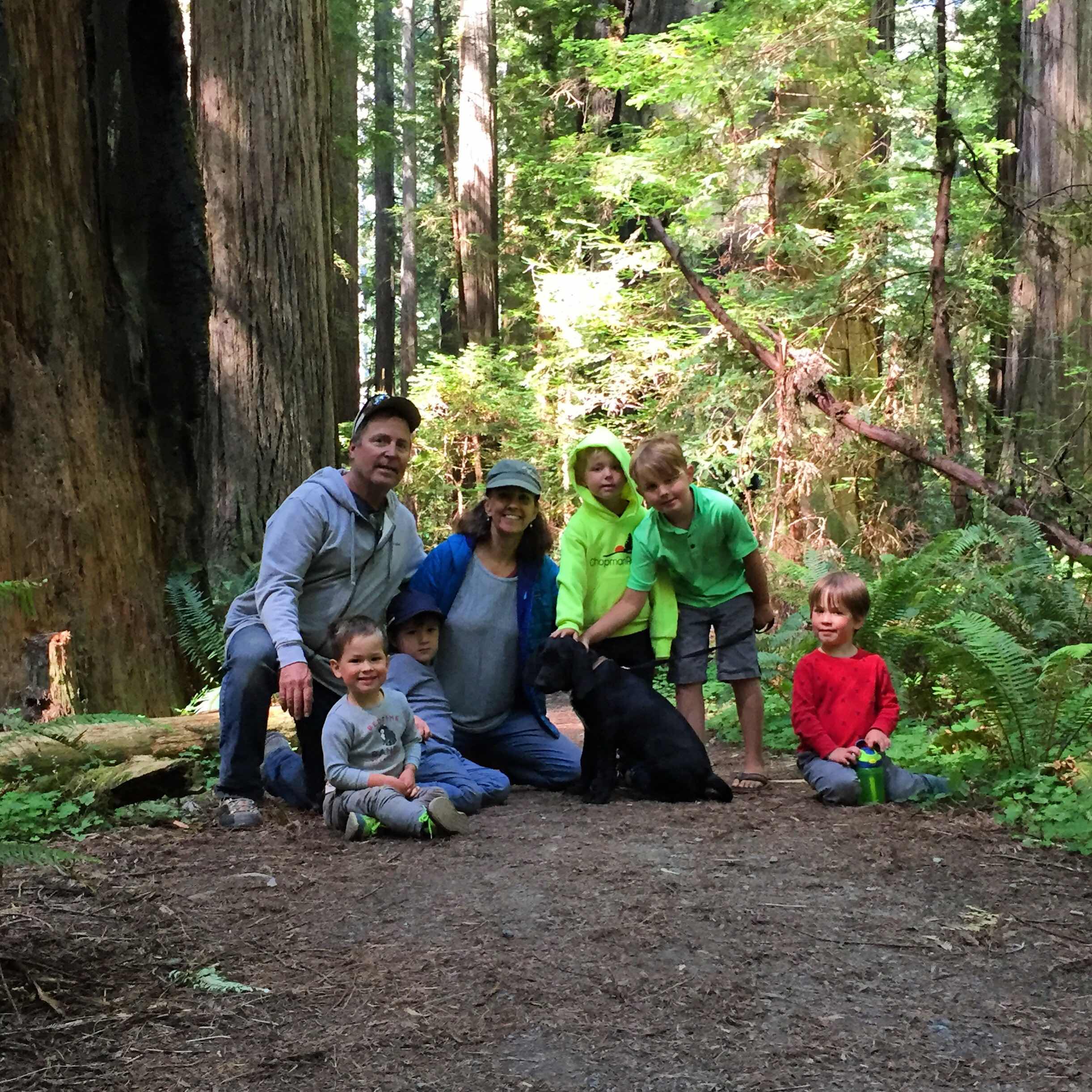 Camping in the Redwoods 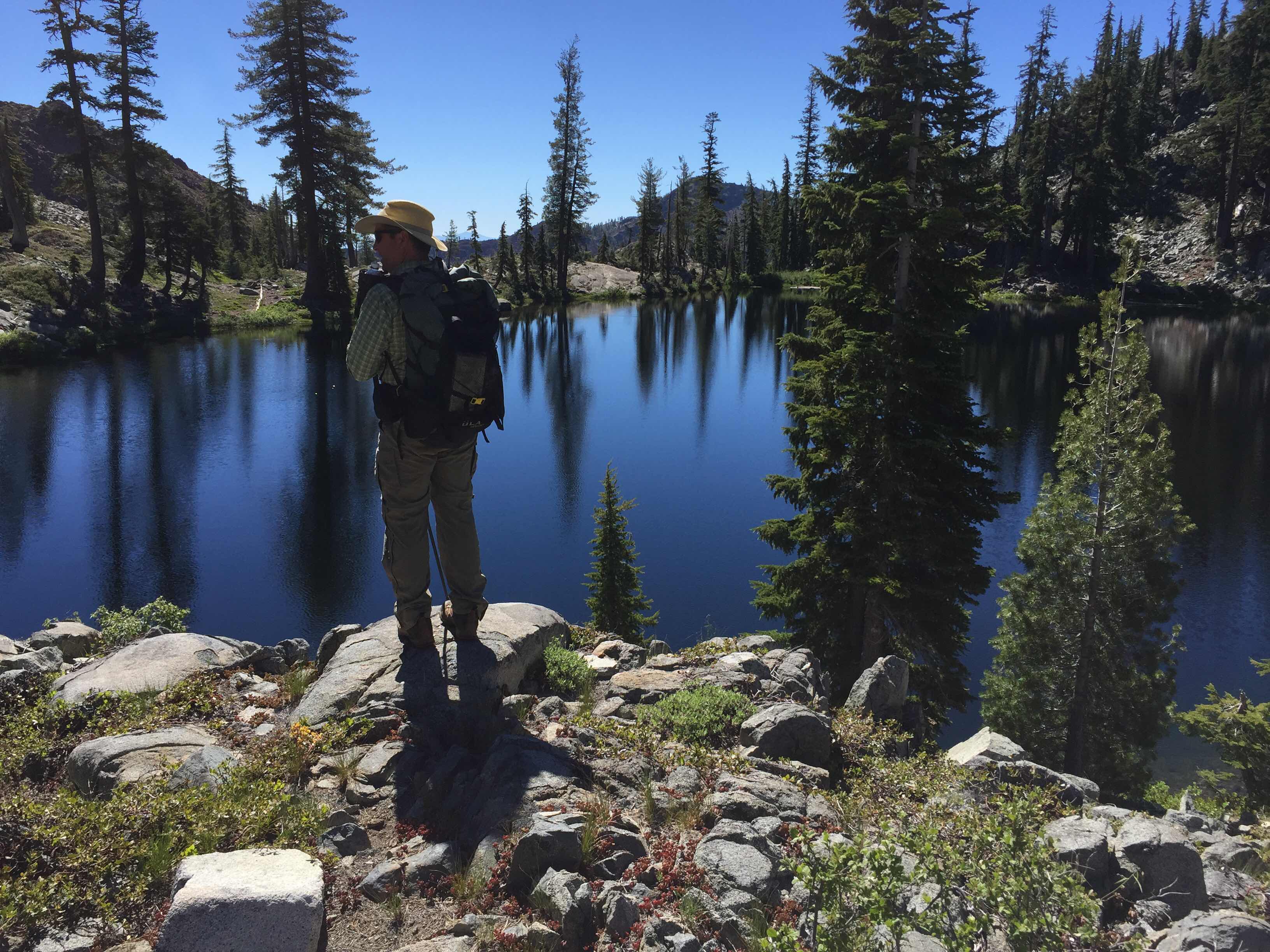 Backpacking in the Trinity Alps 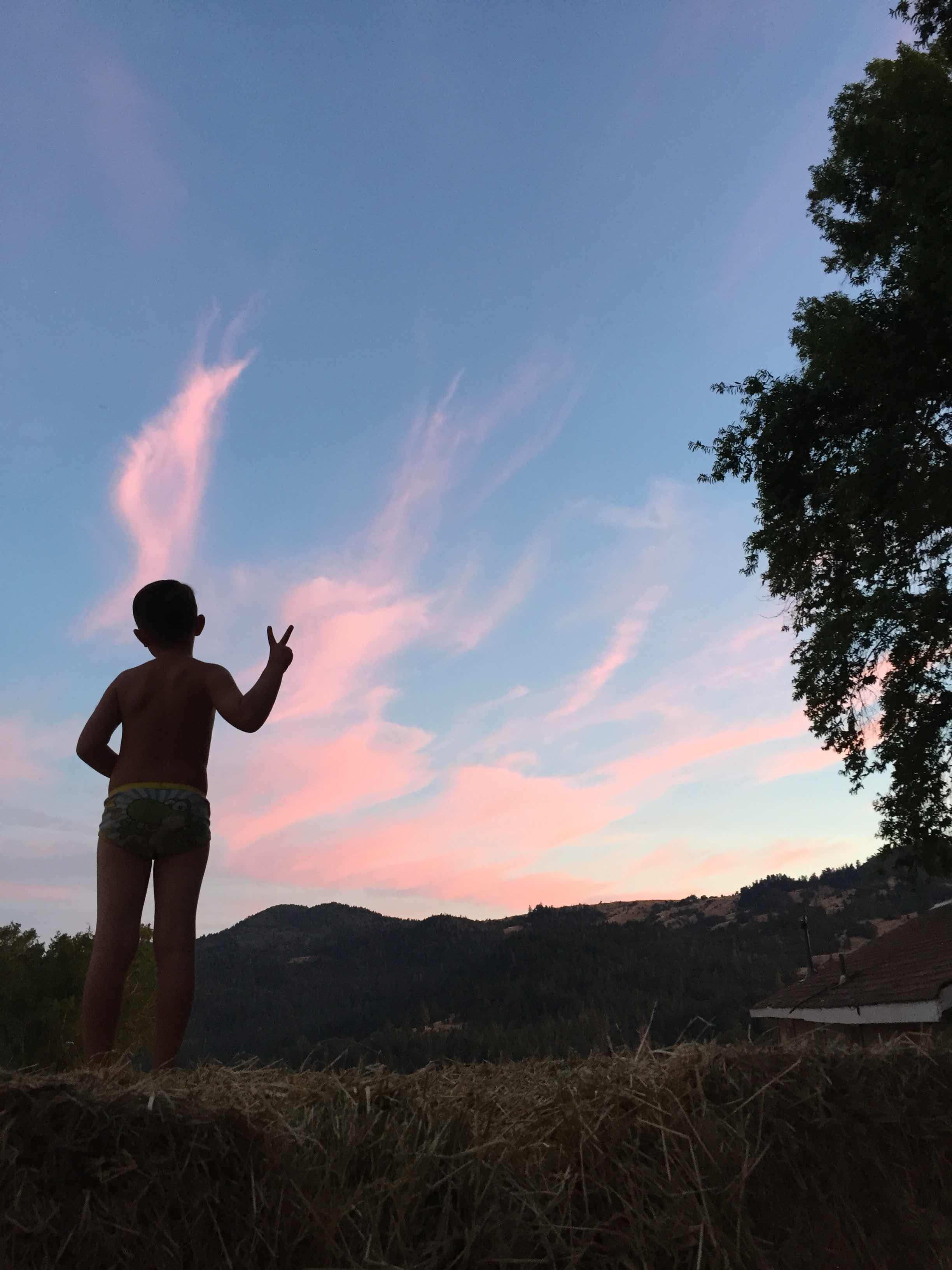 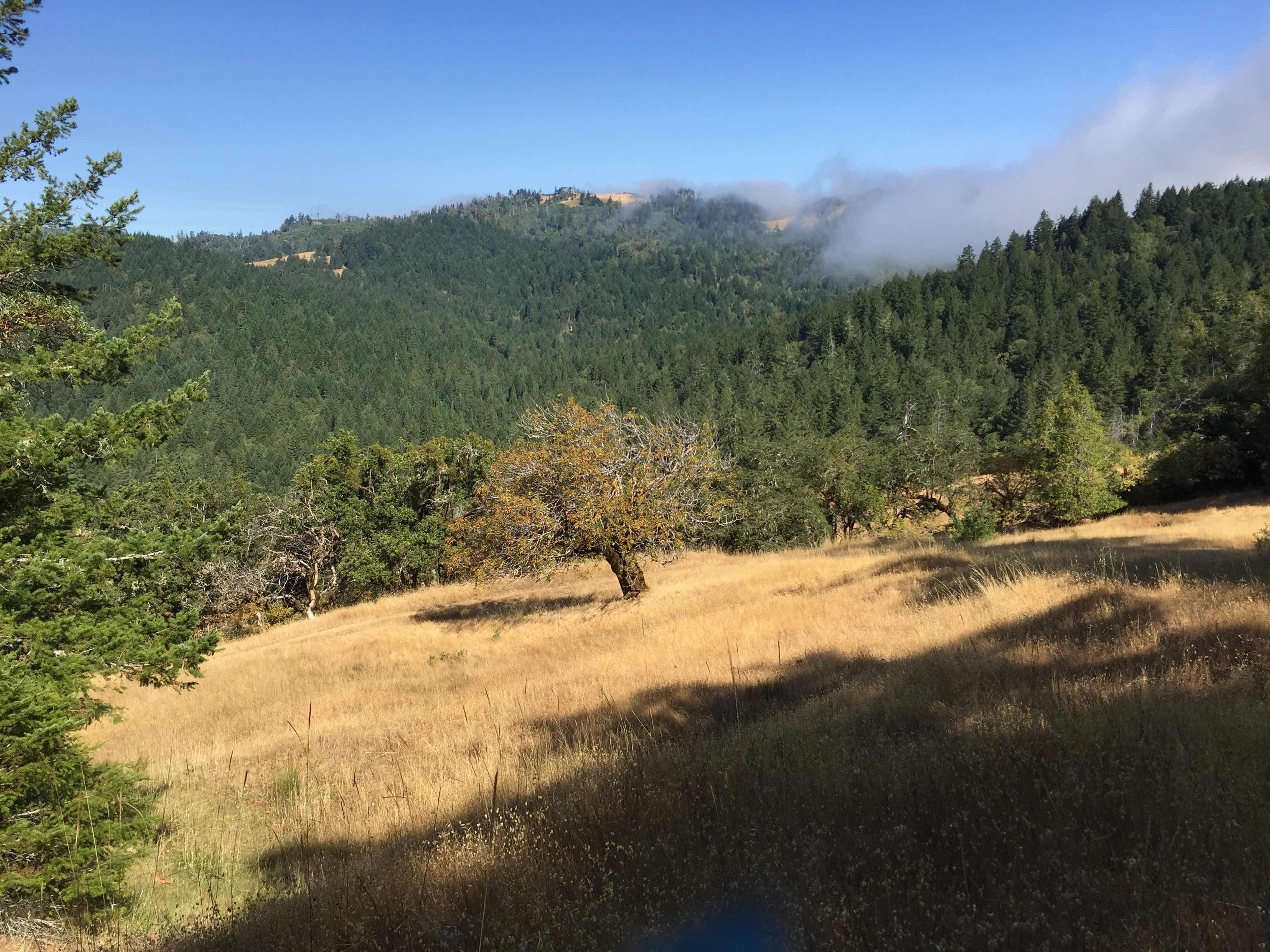 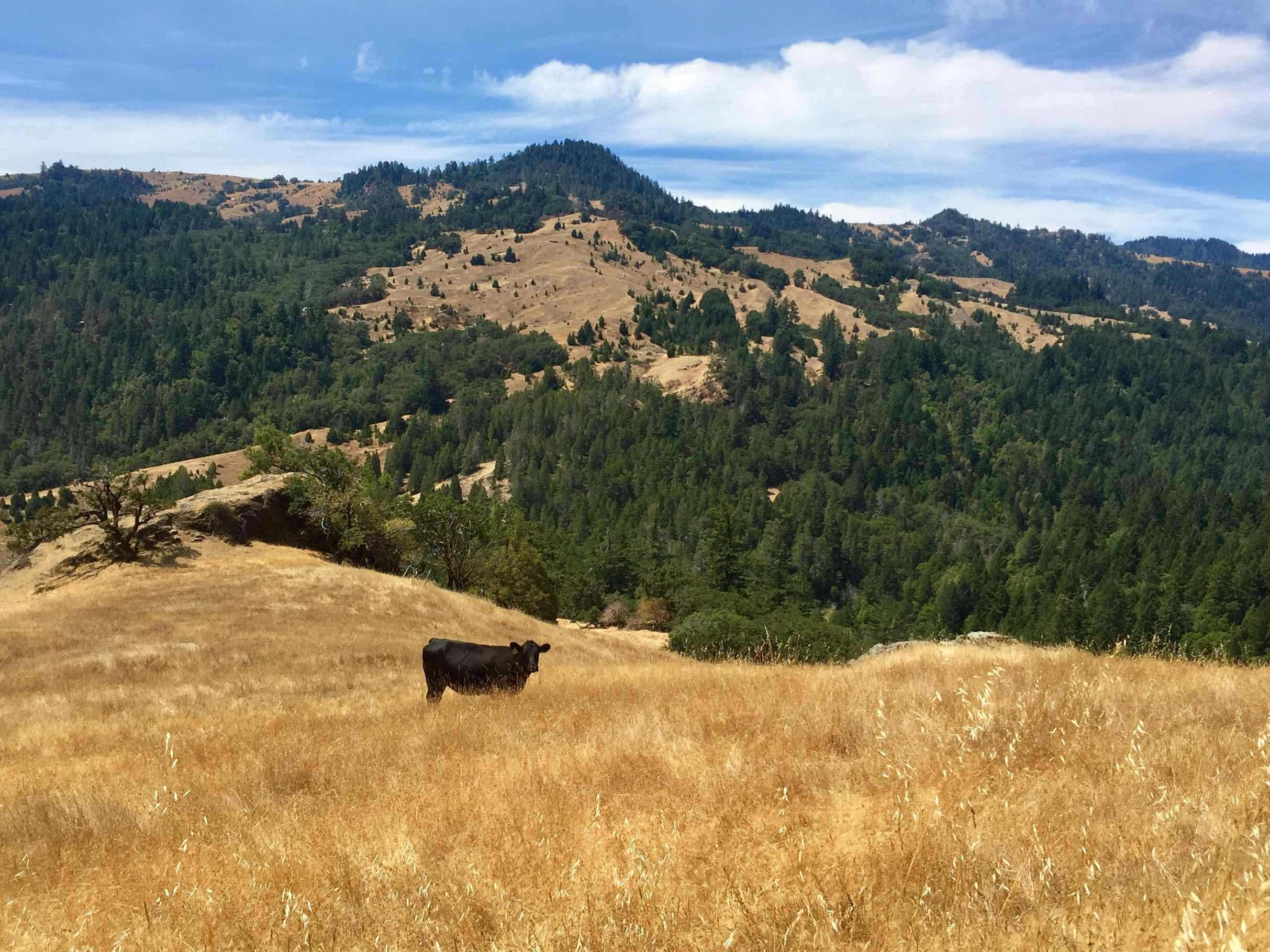 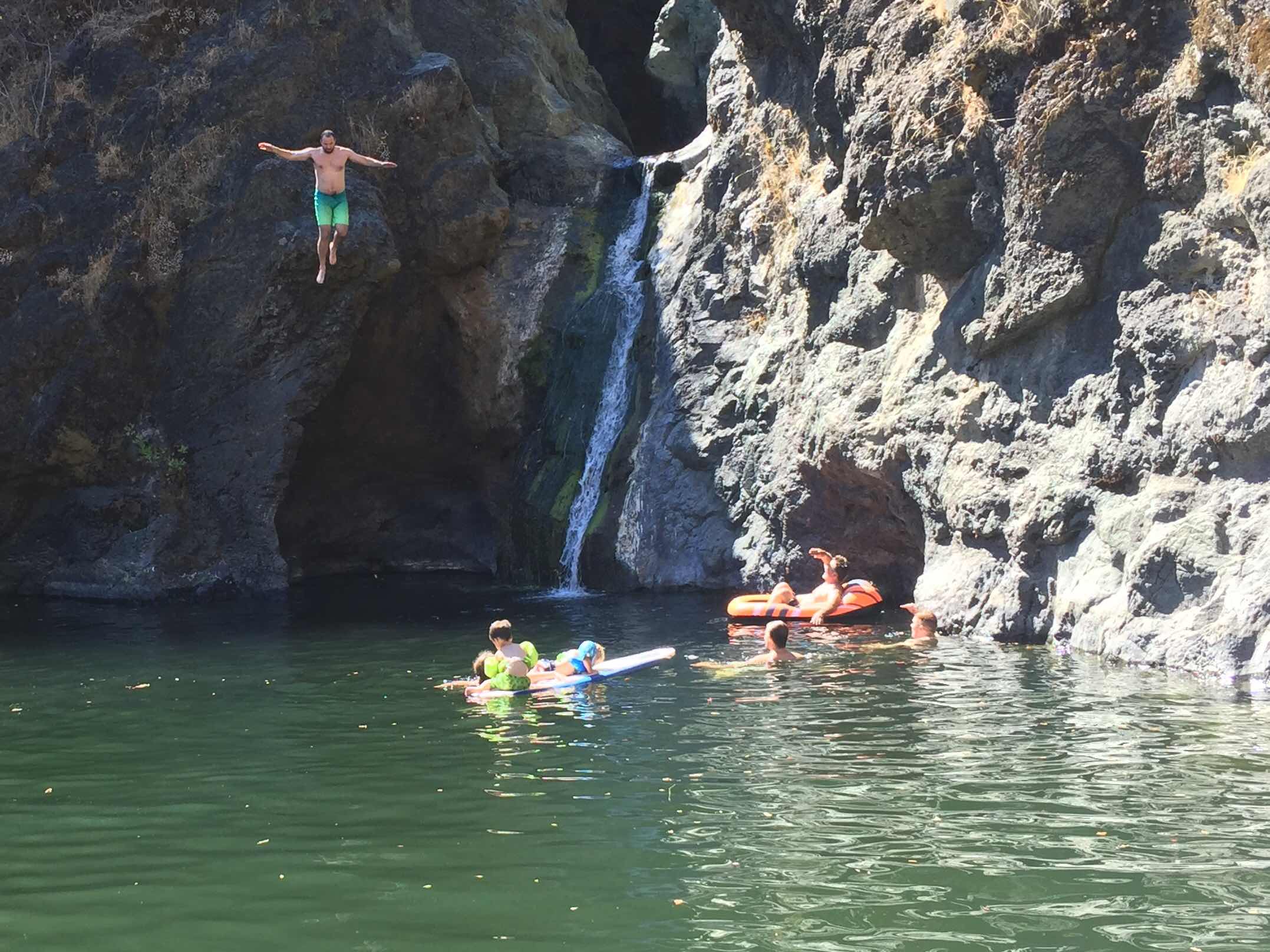 Swimming at the falls.
Looking through my phone’s photos I realize this summer has most often been filled with grandsons. I’ve also learned that I don’t snap many photos of all the work.  Mark keeps reminding me I need to go get some photos of him and our sons logging.  Maybe I’ll do that right now.
Remember your days of summer on this Labor Day weekend. 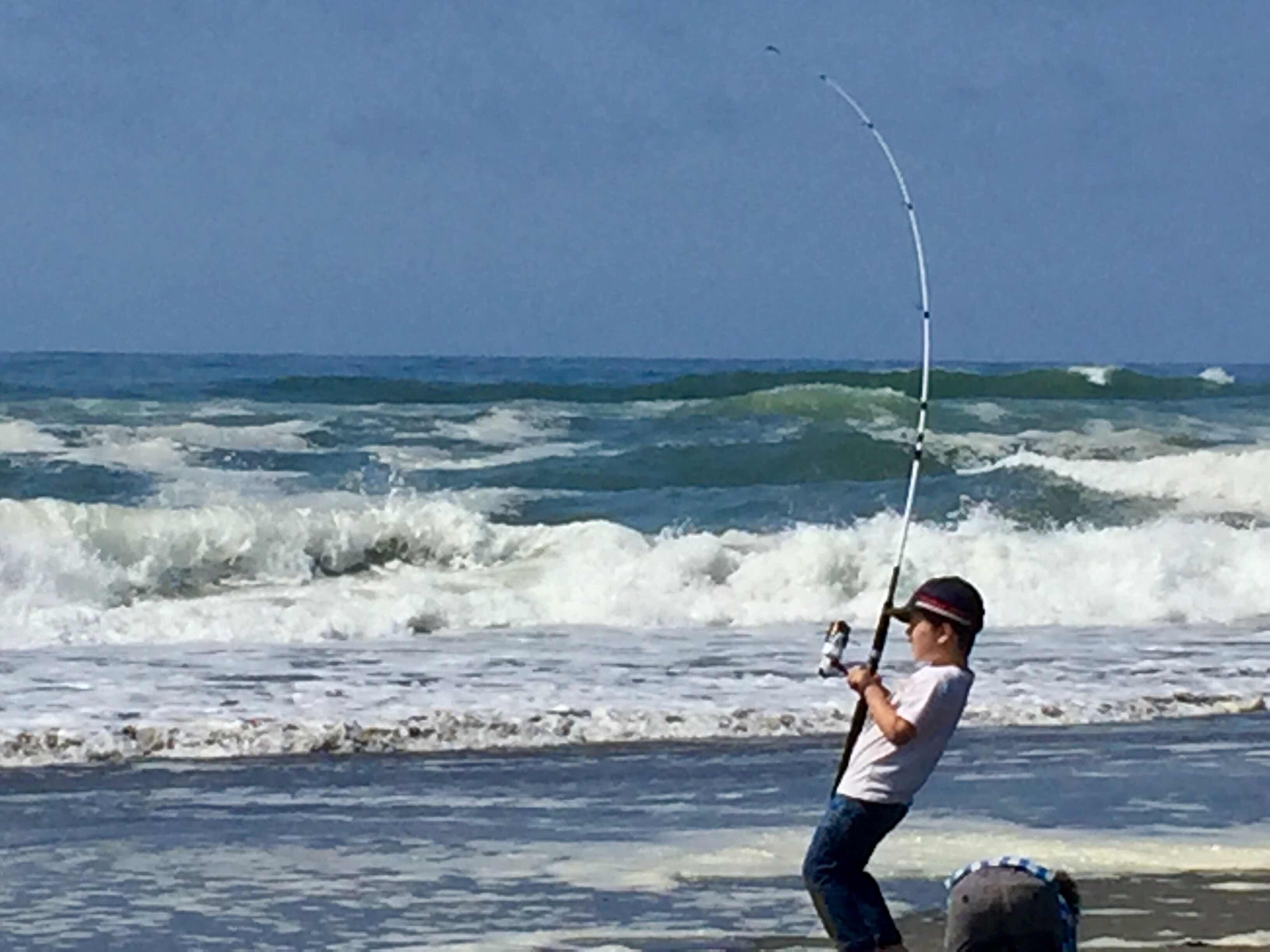 Email ThisBlogThis!Share to TwitterShare to FacebookShare to Pinterest
Labels: family, ranch, ranch life, this and that

We are currently taking orders for freezer beef and pork.  Both are priced the same as last year, at 3.50 a pound on the hanging weight. You also pay the the Ferndale Meats butcher eighty five cents a pound for cut and wrap and get to make all your own choices as to what cuts and sizes you like your packages.   Ferndale Meats also has rental lockers available  to store your meat.
You can purchase shares in a quarter, side or whole beef steer and a half or whole hog.   The steers will be ready mid July and the hogs in the fall.  Both are currently enjoying the spring grass and free roam all over the ranch. 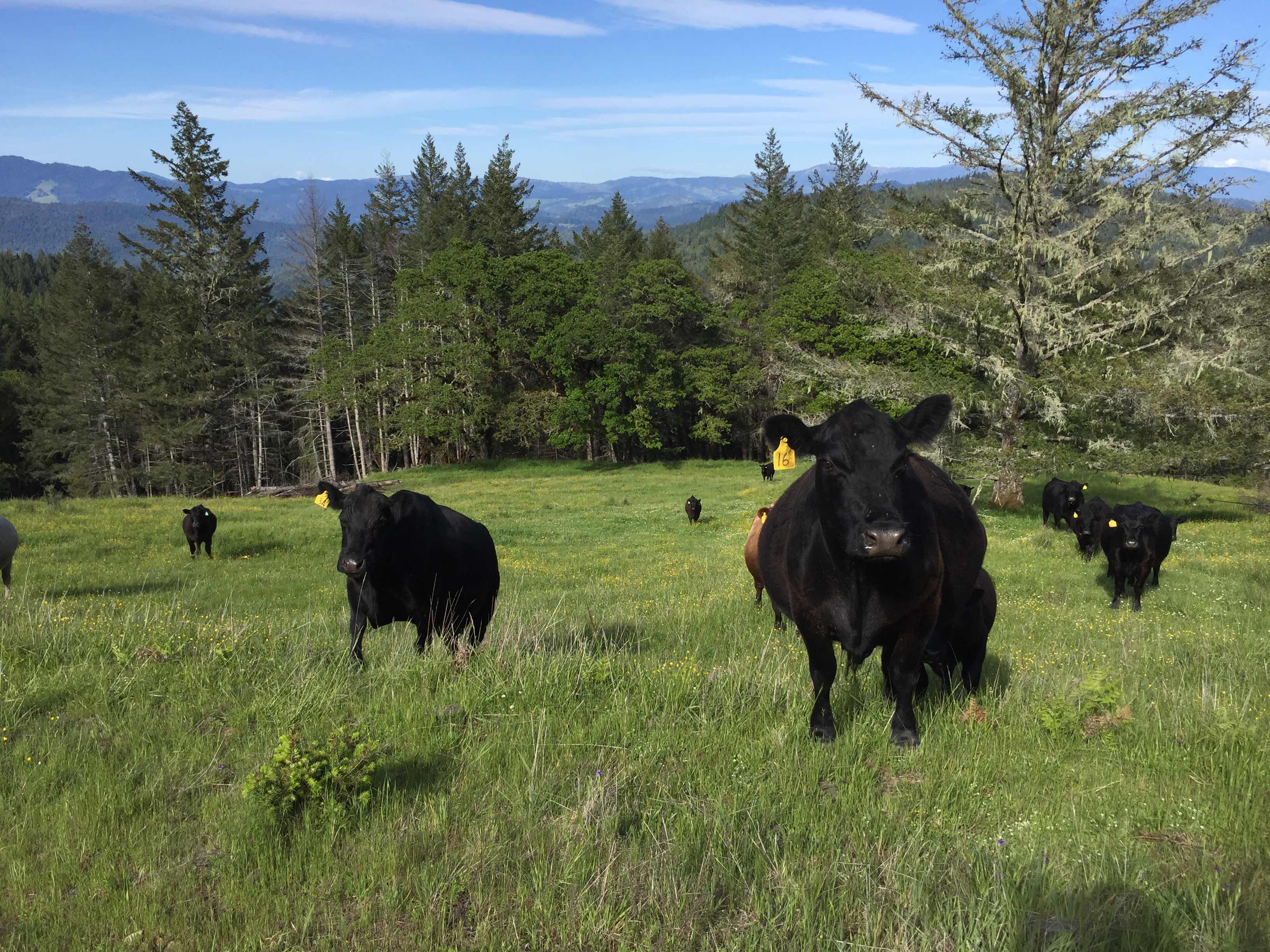 Free roaming and tenderly raised
no hormones or antibiotics

Free roaming and tenderly raised
no antibiotics or hormones